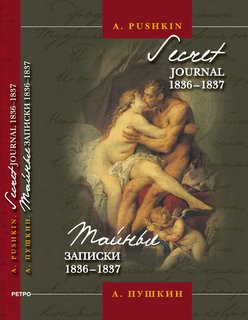 This is the first bilingual English-Russian edition of The Secret Journal http://www.mipco.com/english/pushBiling.html.

It is intended not only for scholars of Russian language and literature, but also for English-speakers studying Russian, as well as Russian-speakers studying English. In the Russian text stressed syllables are indicated to facilitate reading.
The hero of the work, Alexander Pushkin, presents in an encapsulated form his various sexual relations, his complex thoughts on life, the nature of sin, love, and creativity, as well as the complicated path that led him to his tragic end.
The Secret Journal has incited and continues to incite the most contradictory responses.
Now translated into 24 languages, The Secret Journal deserves to be placed among the most scandalous works of Russian erotic literature.
This edition is in celebration of the twentieth anniversary of the first publication of the Secret Journal in 1986.